HomeNewslettersIn With The New Out With The Old at the Piershed

In With The New Out With The Old at the Piershed

Island residents gathered in force to say hello to the new look perished and goodbye to the old piermaster.

After 16 years presiding over the comings and goings of ferries with their diverse loads Piermaster Kevin Byrne is retiring.

Kevin’s retirement coincided with the opening, by Lord Strathcona, of the much revamped ferry terminal. 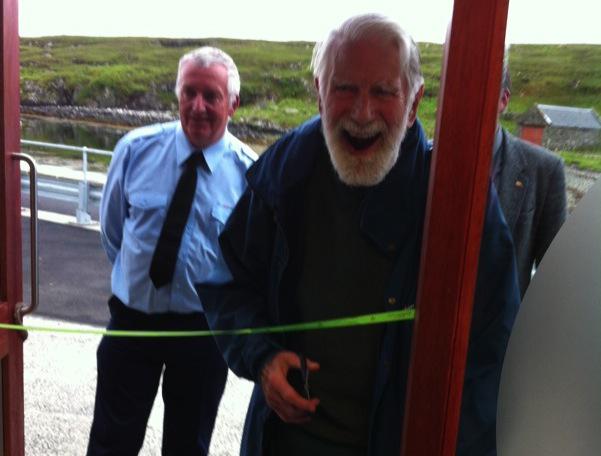 Lord Strathcona cracks a joke as he cuts the ribbon to officially open the upgraded terminal, looking on is Seamus McNeill.

The new look to the building has generally created a more comfortable space for staff and travellers alike with a real counter for the sale of tickets and a waiting area for those occasional shabby days.

The double glass doors that have replaced the roller shutter will provide welcome shelter to those who enjoy standing watching the comings and goings during inclement weather.

The Corncrake however very much hopes that the new arrangements do not hinder the exchange of vital island information, much of which ends up in our Piershed Tales Column.

Over 60 people attended the event and community council convener Sheena Nisbet presented Kevin with a bottle of Glenlivet and a gift of Amazon Vouchers on behalf of island residents and visitors alike.

Kevin thanked the large turnout of islanders for their generosity and kind wishes and said how much he had enjoyed his Calmac role over the years – particularly helping latecomers to make sure they managed to board the ferry even if there were just seconds to spare before it’s departure.