Details of the GigaPlus Argyll scheme to provide guaranteed Broadband speeds of a minimum 15Mbps were circulated recently; hopefully this system will be in operation for Colonsay within two years.  In the meantime, Homefield has a speed which is frequently less than 1kps and which recently was reduced to zero for over a month; and the Service Point had no front-office Broadband from September until February.

So, as an experiment, a one-year contract with Satellite Internet was arranged for Homefield; the cost per month is £22.95 and provides for 10GB of data, based upon 8.4GB download and 1.6GB upload.  If the limit is exceeded you are not surcharged or cut off, but the speed falls to 256kbps (and of course one can simply up the limit, there are various options available).  Because of our remote location, the equipment was purchased on a “self-installation” basis and George Leppard kindly agreed to do the actual work.  The total upfront investment was about £720.00 to include all
the equipment and the first full year’s subscription.  It transpires that the dish provided (which is quite large) can also be used to receive Sky and FreeSat broadcasts.

George opened the box and assembled the dish, then attached it to the wall; he then drilled through the one metre stone wall, and fitted the wires.  The instruction manual looked a bit daunting, mostly like an IKEA leaflet, mostly no words except for worrying ones like “Azimuth” and one rather odd picture showing the dish pointing wnw.  All the same, just by following the somewhat enigmatic guidance, the installation proceeded without a hitch and the system went “live”.

After it went live, an email was discovered which included links to a very extensive and informative website, with a couple of useful video guides to the installation process.  Although this was a pioneering installation it went extremely well, and there can be no doubt that George would handle future installations with even greater aplomb.   It is quite a large dish and will certainly be challenged by our winds; it could be mounted on a pole in the garden, provided the view of the satellite is not obscured and provided that nobody will interpose themselves between the feed horn and the reflector whilst it is powered up, where there is an RF electromagnetic field.  On a speed test it gave 20.96mbs download and 1.59mbs upload, compared with BT in the same building and on the same testbench reading 1.17mbs download and 2.6 upload. In the first week of operation there were periods of high wind which seemed to cause no problem as yet.  Further reports on speed and anything else that arises will follow here in due course; meanwhile interested persons should visit www.satelliteinternet.co.uk 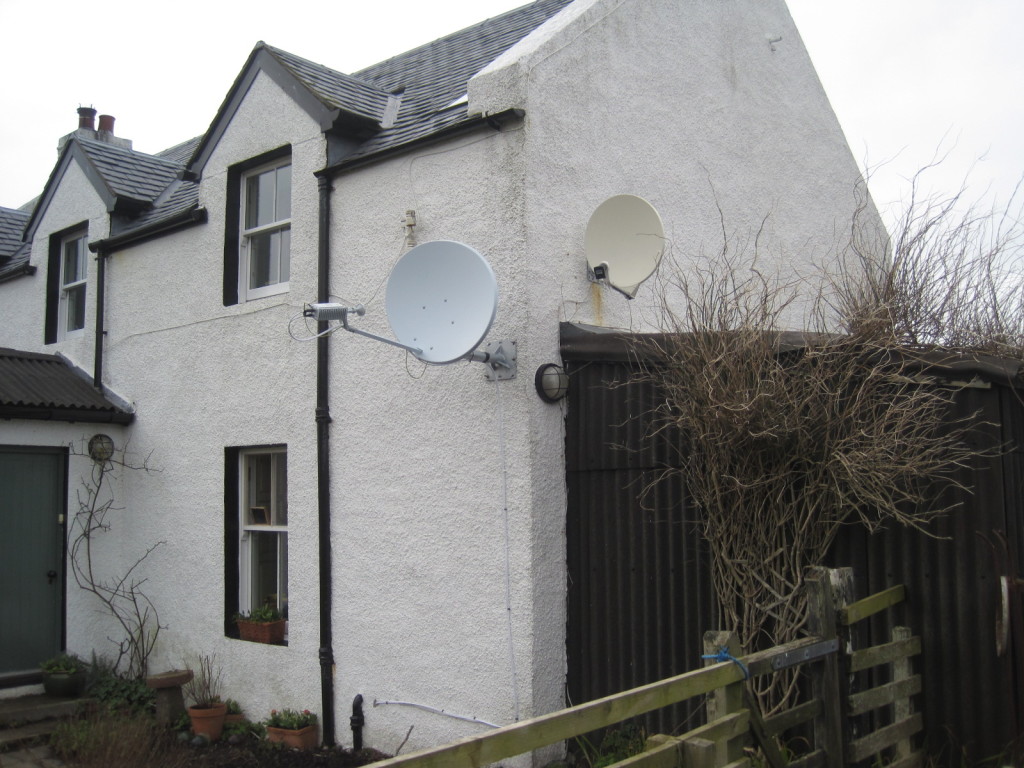