As with many small, isolated communities, Christmas is a time of local tradition mixed with the challenging practicalities of having a major family event in the middle of winter. At this time of year, ferries are prone to disruption and deliveries, from Christmas Cards to Christmas Cake, are liable to be erratic, late or not happen at all.   Even with these challenges Christmas on the island brings the community yet closer, primarily of course around events for children, which naturally includes a visit from Father Christmas. Once the family festivities of Christmas are complete the island comes together once more in a very communal celebration of Hogmanay.

For the last five years the indefatigable Kevin Byrne has led a group of committed volunteers to keep Colonsay clean from litter and rubbish. The 5-year program has focused on the roads and beaches of Colonsay, with the obvious and spectacular results that the island is one the best kept places in Scotland. 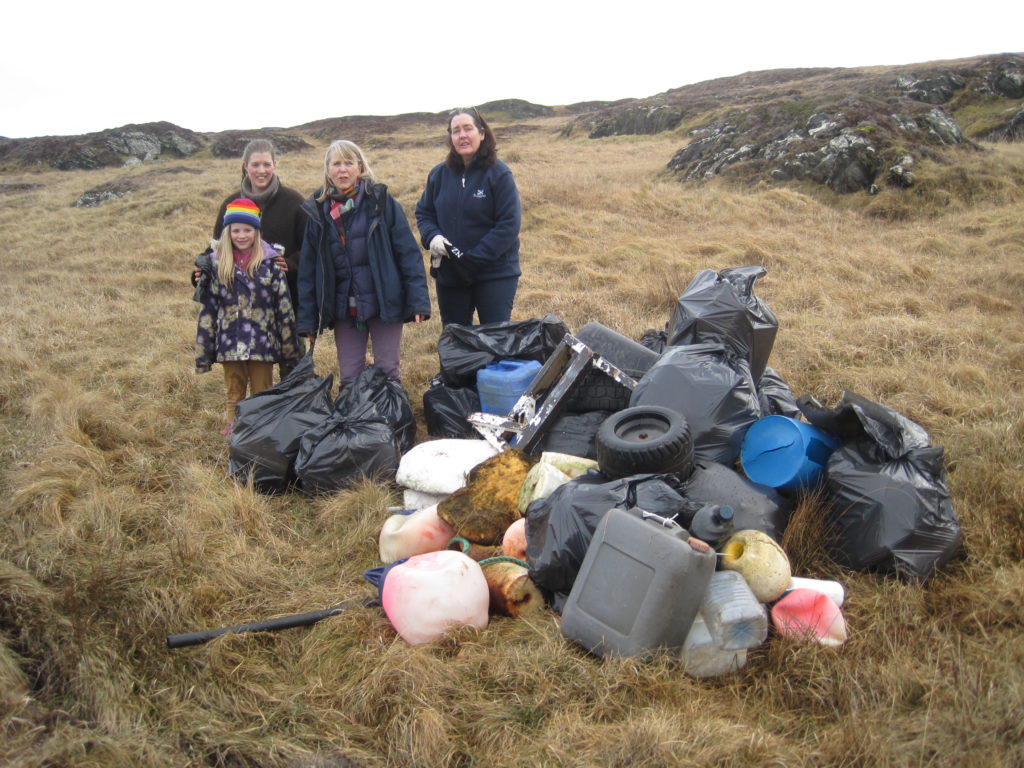 One of many litter gathering work parties

The program stemmed from a decision in the autumn of 2012, by Colonsay Community Council, to launch a 5-year project to clean up the island. The initial aim was to find and remove any litter from all road-sides, all paths, the margins of all lochs and the entire 50 miles of our coastline, and then to keep the island in a pristine state. The plan was regarded as ambitious with some concerned it couldn’t be done. Despite some doubts, in the first year alone over 1500 bags of rubbish were collected, as well as a far greater quantity of un-baggable ropes, nets, wires, refrigerators, lorry wheels, buoys, creels, fish-boxes and miscellaneous junk. 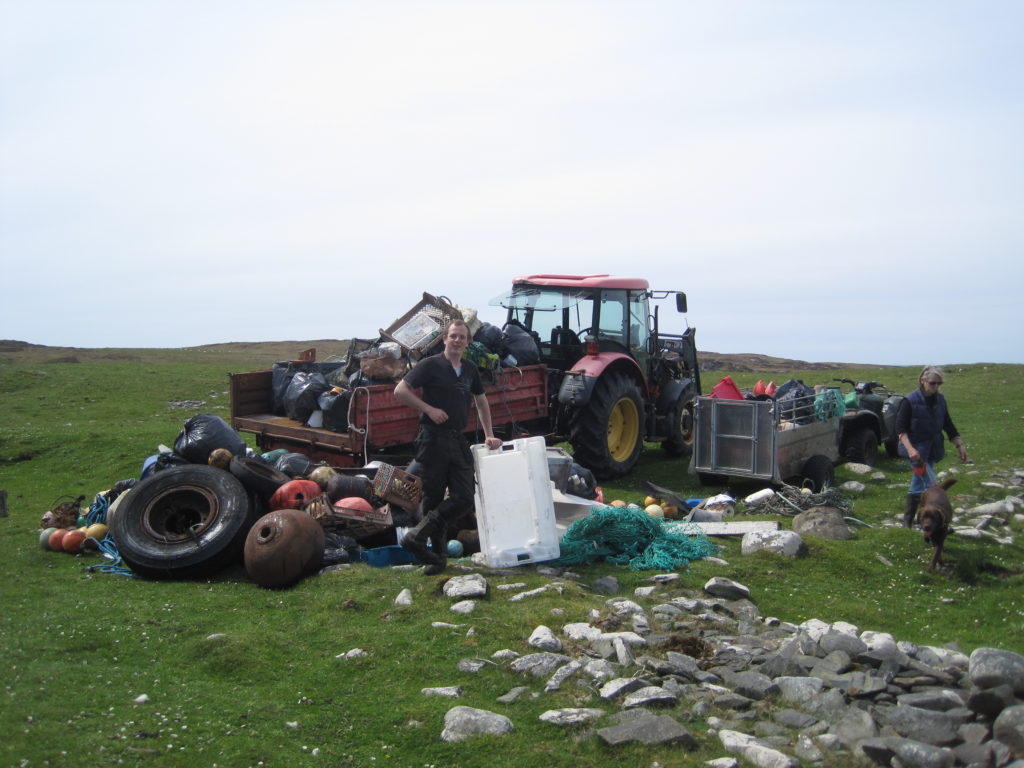 The immediate success of the program was primarily down to enormous support by both by local people as well as innumerable visitors, all of whom volunteered the own time to join in weekly planned clearances of successive sections of Colonsay’s roads and, most visibly, its beaches. The collected bags of rubbish were then cleared by George Leppard and his team, and loaded into council lorries. The support of Argyll & Bute council for the project was very encouraging.

“Five years have gone by. The ancient, half-buried band of rubbish that stretched far beyond the tide-line is long-forgotten, and nowadays the litter-hunters merely travel the length of the high-water mark. Sea-borne rubbish still arrives but there is zero-tolerance for actual “litter” and it is only the rare buffoon who drops a sweet-wrapper or tosses away an empty can. A peculiar class of visitor does carefully collect and bag their dog-pooh and leave it for (who?) to collect from the roadside, but at least there are very few trees from which to hang it.” 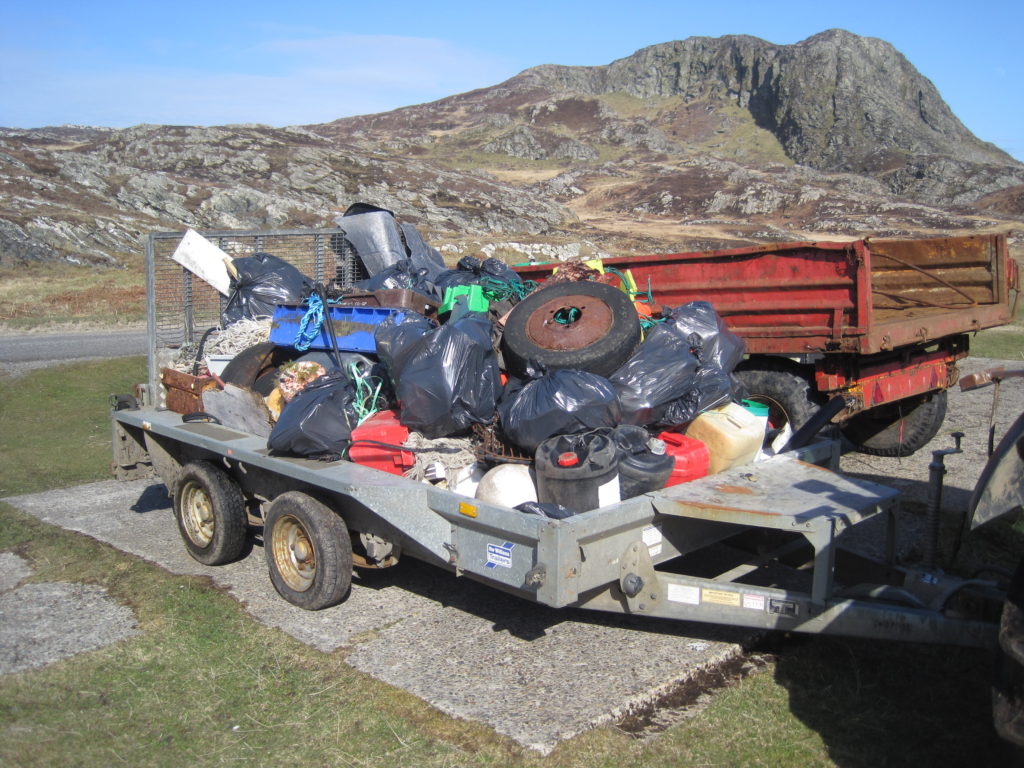 Litter from Machrins loaded and ready to go

Even though the program has relied very heavily on the good will of countless volunteers, there are necessarily some costs. These amount to around £500 per year. Colonsay Community Council has paid for the cost of insurance for a dedicated quad-bike, essential for the recovery of material from remote areas; and Colonsay Bookshop sponsors the quad-bike itself, along with all the plastic bags. The owners of Ardskenish House also made a very welcome and generous contribution.

At the most recent meeting of the Colonsay Community Council the overall success of the project was evaluated. The program has been a big commitment, particular for Kevin Byrne and the regular volunteers who have worked tirelessly with him, dedicating precious hours of their spare time to the good of the community. Their hard work, particularly in clearing historically deposited rubbish and litter, has enormously helped the situation. Around 400 bags of “new” litter are coming ashore each year; a far cry from the originally 1500 from the first year of clean-up. The widespread and growing support for the project has led the councilor to agreed that the program will be renewed for a further five years. Visitors and members of the community are urged to play their part. For those who wish to support the program there are collection centres at Port Easdail and Ardskenish, from which beach-litter is regularly removed.

Further details of the current program, together with guidance on how to play a role yourself, can be found on the project’s dedicated webpage:

Christmas on Colonsay is marked by series of special events which bring seasonal cheer to the local community, and a surprising number of visitors who too find the traditional style of Christmas on Colonsay something to savour and enjoy. The Kilchattan Primary School play was on Tuesday 12th, and the annual Carol Concert was on Thursday 21st. In the run up to Christmas the island’s Christmas Tree party took place on Sunday 24th, with an appearance from Father Christmas to delight children young and old, while later that day the traditional watch-night service saw in Christmas Day itself. After the celebrations of Christmas had barely faded before Hogmanay ushered in the New Year, with celebrations and fireworks at the Colonsay Hotel, and much first-footing well into New Year’s Day.

Colonsay is always a place of unexpected pleasures, and December’s included a Swing Dance Workshop with Allie and Jass introducing the joy of Lindy Hop.

The body of a large Fin whale has landed on Kiloran Bay.  It is about 20 metres long, weighs many tons, and as yet no one knows how to remove or bury it. 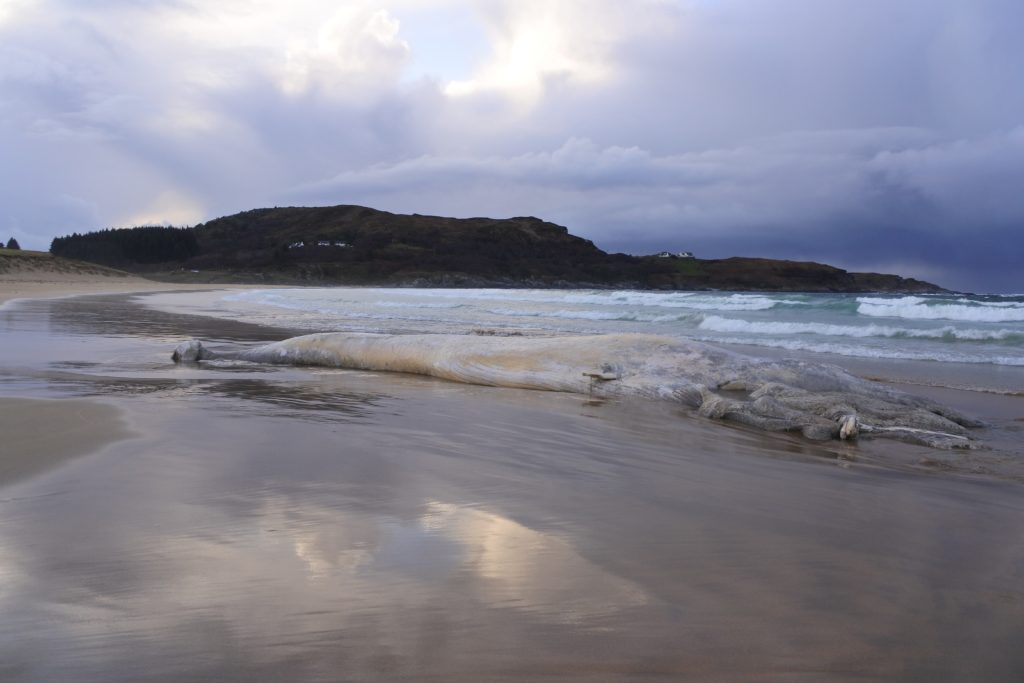 The body of a large Fin whale on Kiloran beach

The full Corncrake for December will soon appear as a pdf on the website and in hard copy at the Post Office.