May was largely dominated by Northerly winds which slowed down spring migration, it felt more like autumn at times! 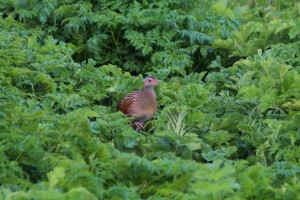 We heard our first corncrake of the year on the 22nd of April and they really started making themselves known on Oronsay during the first few weeks of May with their distinctive ‘crex crex’ bring heard throughout the day and night. An initial survey here has found at least 13 calling males, which is a fantastic start to what will hopefully be another successful breeding season.
During our daily livestock checks, two colour-ringed twite have been spotted. Both the birds were ringed Heysham near Morecambe. These are very interesting records as they will likely be breeders on Oronsay, here for the season and then moving south for the winter. Twite are a small member of the finch family, closely related to the linnet. Males develop a striking pink rump during the breeding season. They feed on seeds the year round. 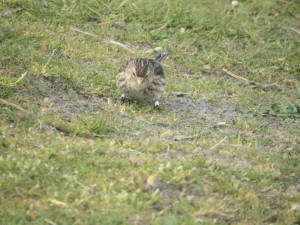 The waders have been held up with the poor weather, a flock of approximately 500 dunlin and 300 ringed plover being seen on the reserve. Additionally, there have at times been up to 20 whimbrel stopping off before completing their journey to breeding grounds. Cuckoos have been heard across Colonsay with the first on Oronsay heard on the 8th of May. 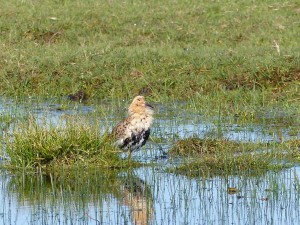 This striking ruff was seen on the 14th, a very interesting sighting as it is just moulting into breeding plumage. This bird was seen on the south end pools
During May two white-tailed eagles have visited Oronsay. The first was spotted as it tried to fly off with the last remaining barnacle goose. The eagle was mobbed by just about every bird in the area, and eventually flew off towards Islay. The second was spotted on a breeding wader survey late one evening. Other species which have been seen on Oronsay recently include four dotterel, a pair of garganey, arctic terns, a pair of little terns and an arctic skua. 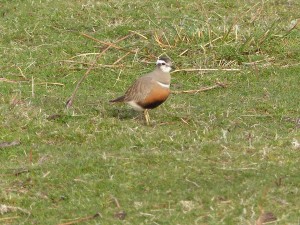 In other news the islands flora has now belatedly begun to add some colour to the land. The yellow flag iris has started to flower, common spotted orchids are beginning to emerge and carpets of beautiful bluebells can now be enjoyed. Butterfly sightings have included green-veined white, peacock, small tortoiseshell and green hairstreak. Unfortunately the weather has not been good enough to make moth trapping worthwhile, however a glaucous shears was found inside one of the cottages. This species feeds on a wide range of moorland plants including heather and occurs sparsely throughout western and northern Britain.
What to look out for in June
With warmer temperatures hopefully on the way there should be an emergence of summer butterflies, including the extremely beautiful marsh fritillary. Chicks will be starting to fledge in larger numbers and there will be an increase in flowers to add some colour.
Finally, I would like to take a moment to introduce myself. My name is Luke and I am the newly appointment assistant warden on Oronsay. Izzy has now left for a new job on Islay after an amazing four years with us on Oronsay. All of us at the reserve, and I am sure many of the people of Colonsay, would like to wish her all the best in her new adventures.
Luke, Assistant warden Oronsay Reserve
luke.wake@rspb.org.uk
RSPB office – 01951 200 367