Though the not-quite-a-drought time eventually ended, summer did not part, as it might have done, at the beginning of July. Though the weather was more mixed there was enough warmth and sunshine to please the throng of visitors who still find in Colonsay comfort in natures natural beauty and a freedom long lost in humdrum urban living. Enough freedom and enough wildness in the spinning frenzy of a Dashing White Sergeant or an Orcadian Strip the Willow, Colonsay style, at live music enhanced ceilidhs that pop-up to welcome, with a warm smile, visitors embracing Hebridean life.  All hands are busy now in the hotel and in the holiday lets, and busy too on the farms and crofts: cutting grass, turning hay, baling, as even now in the height of summer work for winter cannot wait.

The CCDC held its AGM on Saturday 21stJuly.  The following extract is taken from Dannie Onn’s report on the CCDC’s work over the past year.

“This year has also seen the furthering of projects identified in previous years.  The play park has been delivered and passed on to its own committee. The recycling initiative has crept forward.  The first phase, a composting scheme is about to be delivered. This too has been passed to its own committee.  We hope that environmental initiatives such as this will gain momentum.

The revamp of the community website is nearing completion and we hope it will be on line soon. It will offer additional functionality and we hope to increase the community focus.  This should complement the profile of the island offered by the island’s tourism marketing group website.

The crofting project continues. It started many years ago, and successfully attracted ten new residents.  However, it has proven difficult to agree leases between CCDC and the crofters and not all have yet been able to develop their crofts as they wished.  CCDC has been working with a specialist in Crofting law to resolve issues.  Thanks to mediation and support from the crofting sub group members, significant progress has been made.  An absentee crofter is in the process of having his croft re-assigned.

In March 2017 Argyll and Bute Council granted Planning Permission for us, with our partners West Highland Housing Association, to build 5 affordable housing units near Port Mor. This project has stalled because of an access condition attached to the planning permission. Negotiations for the land required are still underway.

As most of you will know, the funding stream for LDOs came to an end in April of this year.  Colonsay no longer has an LDO post.  In 2017-18, CCDC employed two local development officers; Ros Jewell and Carrie Seymour, as a job share, taking over from Caitlin McNeil. The staffing is complemented by Kirsty MacAllister and Tanya Wren in the Argyll and Bute Council Service Point.  Tanya is also the CCDC Company Secretary.

The board has worked on and produced a new business strategy to focus resources for the coming year and beyond. Copies are available from the community development office at the service point.

We operate within the context of Scottish Government ambition that every community should have access to the land and resources it needs to be sustainable.  There is a national focus on island communities. The Islands Bill* supports this, along with the increasing powers available under land reform and community empowerment legislation.

The board has investigated the powers available.  This coincides with development of the business strategy, itself deriving from the community plan drawn up in 2012 and further consultation carried out last year with members and island residents.  The board also has ambitions to review and up-date the community plan, aligning with local community planning at Argyll and Bute so that we can have a greater input into what and where development will be permitted.

The emphasis for the coming year will be on the delivery of the business strategy.  The projects include new housing; business space; a campsite and additional moorings for visiting yachts.  The HIE funding stream that supported the LDO post has come to an end. The business strategy and the efforts made by the board to become stable and effective have persuaded HIE to part fund the post of a project coordinator for the year. We also continue to have the support of Argyll and Bute council in running the service point. The new post has been filled as a job share by the former LDOs, Ros Jewell and Carrie Seymour. We must deliver on our strategy to have a chance of funding in following years.

We have also been given consultancy support by HIE to continue the improvements to the way we operate.  Initially that includes a financial review and further specialist advice on land acquisition.

In accordance with the business strategy agreed with HIE we have programmed the work for our project coordinators.  By the end of their ten month term a site should have been identified and acquired for further affordable housing; the development of business units should be at the planning permission stage; the relevant studies for development of moorings should have been completed; and the campsite viability will have been established and land for it identified. I should say that HIE have agreed that any of these projects can evolve into something different or be replaced if they are shown to not be viable, provided that we meet HIE expectations and the underlying objects of the company can be met.

The work of CCDC is undertaken by the board, with support from staff and outside consultants. The board would welcome help from those able to contribute particular skills and experience.  It may seek to co-opt new members, and will consider re-activating working groups to follow a particular line of work either related to specific projects or the management of the company. If anyone wishes to step forward please have a word with a director after the meeting.

The Colonsay Trading Company is wholly owned by the CCDC.  However, we are advised that it should be separately managed.  CCDC directors are currently the directors of the trading company, but we have this year held separate meetings and should move forward to separation of functions between the two boards.  We will look to new directors to take on specific roles.”

The new Community Play Park next to the Community Garden was formally opened on Saturday 21stJuly councillor Robin Curry. 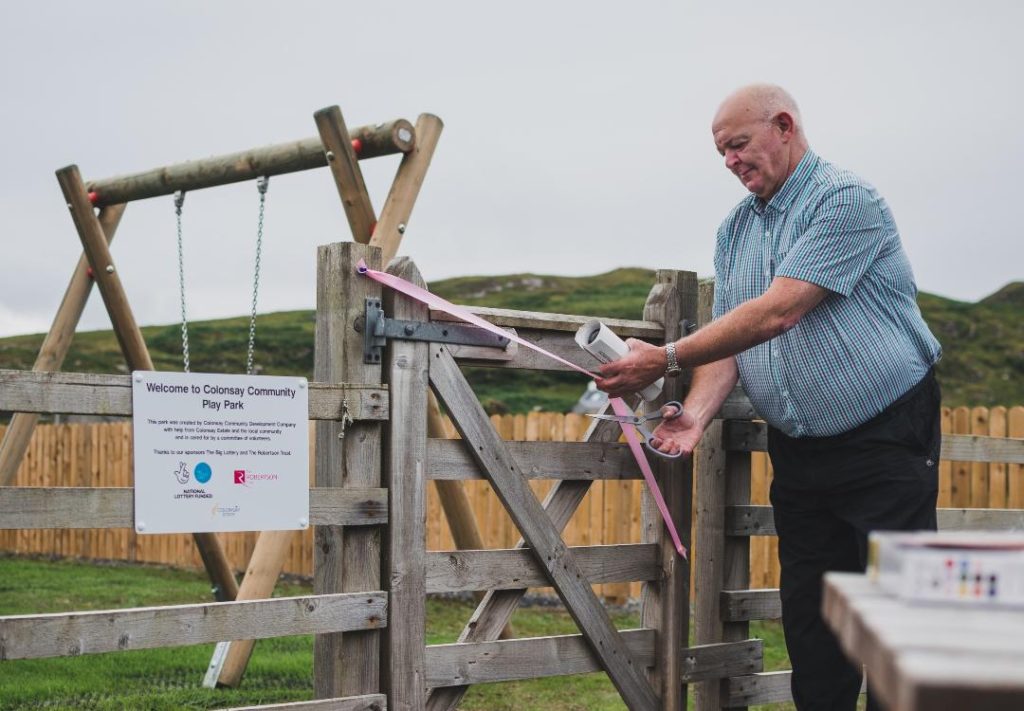 Locally conceived and locally delivered, the Play Park is one of a number of projects that the Colonsay Community Development Company (CCDC) has been working on.  In a model that the CCDC intends to replicate, responsibility for the Play Park, now built, passes to its own committee, so that those benefitting from the Play Park can be actively involved in its continuing maintenance. 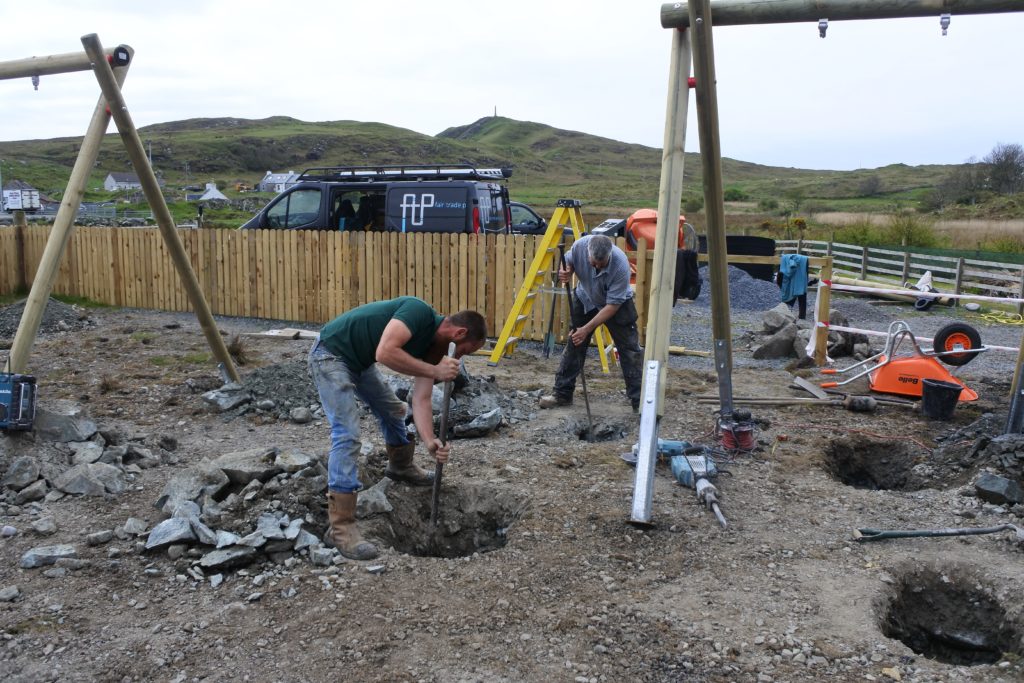 Work on the foundations for the Community Play Park

The need for a Play Park has been questioned by some in view of the wealth of open space Colonsay has, but local Caitlin McNeill takes a strongly positive view:

“Today, Colonsay gained a couple of swings and a seesaw. If you’ve spent any time with me in the last two years you have probably heard me talk about this. There are a few reasons I became so obsessed with it. Firstly, with just five kids in our primary school now, it gives the wee ones somewhere to meet visiting children and make some new pals. Secondly, it’s a safe place for the kids to play and a nice chance for the adults to chat and not have to worry about the wains dashing off towards the pier. Finally, and for me most importantly, it is putting the young people – parents and children – of the island first for once.” 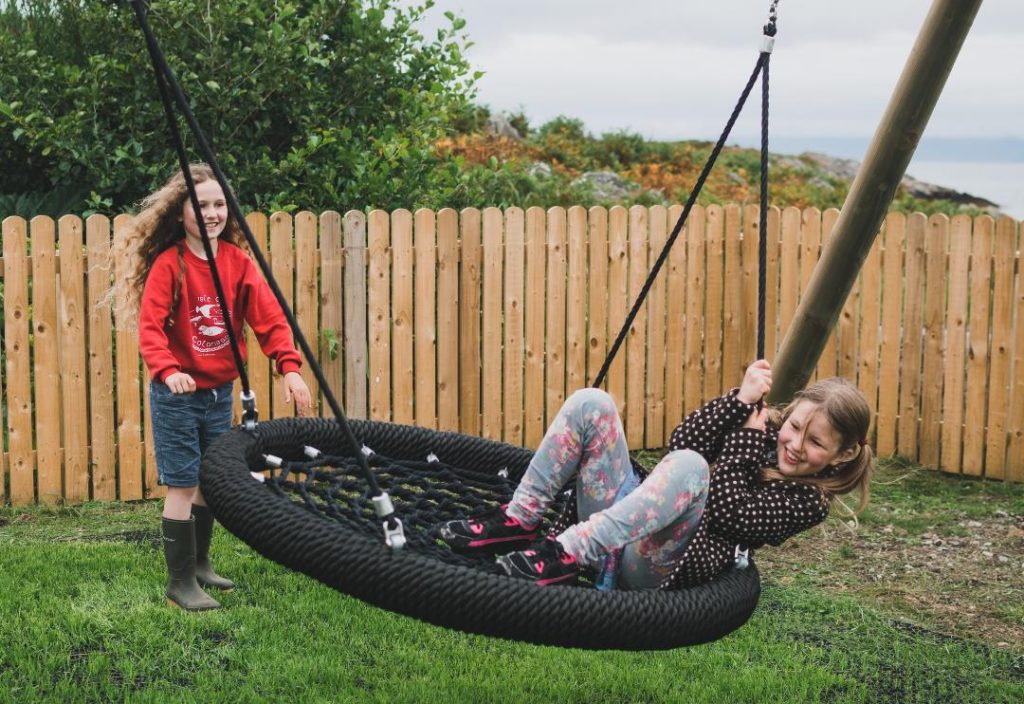 Who would not be won over seeing young children and their parents enjoying time together?

Two separate dramatic incidents overshadowed this year’s Rugby Festival.  Just before the festival Patrick Beaumont, a member of the team from Strathendrick RFC, was rescued after falling down the cliffs at Dun Gallain, and on the Saturday night a storm blew away much of the festival’s tent village and the community hall had to be pressed into use as an emergency shelter.

Patrick Beaumont, his brother Douglas, and father David have been regulars at the Rugby Festival since its inception.  Patrick was walking with friends on Dun Gallain when ground near the cliff edge gave way, and he fell more the 30m on to the rocks and into the water below.  Prompt action by those with him got him out of the water to relative safety, though unsurprisingly he suffered serious injuries.

“Patrick, Douglas and their pals Conall and Fionn Whyte decided to go and sit down in a hollow, and watch the sun go down.  It was on his way to this that the grassy patch he stood on gave way and down he went!  David, Douglas, Conall, Fionn and I all scrambled down as best we could.  By the time I got down the lads had jumped in and got to Patrick. I shouted to get him in the recovery position on a rock out of the sea and then climbed around to where they were.

Emergency services on the island were quickly put into action, and with Patrick’s injuries stabilized he was evacuated to the mainland by helicopter.

One of those involved in the initial rescue was David Kurz a hitchhiker the Beaumont family had picked up on their way to Colonsay, and who stayed along for the ride and chance to explore a remote Hebridean island.  A skilled rock climber, David made several accents and descents of the rock cliffs in the minutes after Patrick’s initial fall.

Three months on from his fall and Patrick is recovering well and back studying at Aberdeen University.  Patrick and his family are extremely gratefully for all who helped on that night and since, especially mentioning Rhona and all at the Colonsay Health Centre.  Patrick’s father David said:

“ I am so grateful to the help that everyone gave on the night it happened, the fact that he was only in the water for a very short time is a credit to his two pals and his brother who were down the cliff and into the sea in seconds.  Once we’d established his vital signs were ok, and confirmed and reconfirmed this with the string of first aiders and medically trained who got down to us, there were so many people who then formed a coordinated chain from cliff top to the bottom, that could bring warm things down, take cold lads up, bring the doctor, bring torches, establish communications. It was a near textbook rescue that unfolded before me whilst I was busy trying to keep calm, keep Patrick warm and come to terms with everything.  The fact that there were so many different team members and organisers from the rugby festival who combined their efforts over the 3 hours from the fall to Patrick getting winched away made so much of a difference. The two lads from Inverleith RFC and Alan Gens RFC who remained on the rock with me and Patrick for the duration, keeping our spirits up, were fantastic.”