July sees the start of the ceilidh season as the Scottish school holidays begin and the season on the island moves towards its peak. As well providing great entertainment for visitors and locals, these ceilidhs form an important fund raising opportunity for the voluntary organisations and clubs on the island. Although traditionally on Saturday nights ceilidhs are now increasingly run on Tuesday nights to avoid clashes with other Saturday night events and to adapt to changes to the ferry schedule, which see many visitors arriving on the island early on Saturday evening and heading to their holiday homes to settle in. Whenever they occur the ceilidhs continue to be one of Colonsay’s strong traditions, providing an opportunity for younger children to come together and play traditional games, and then watch their parents and the older children dance with great energy and greater or lesser dexterity to traditional ceilidh tunes, like the Dashing White Sargent, Canadian Barn Dance, Pride of Erin Waltz and, of course, Colonsay’s own variant of the Orcadian Strip the Willow. This is not the only ceilidh dance with its own Colonsay version, and practiced dancers from neighbouring islands can spot those raised on Colonsay’s special and unique steps.

July’s energetic activity was not confined to the hall as the Colonsay Rugby Festival made a welcome return, while for those looking for more restful entertainment there were concerts by Pedie MacNeill and friends and a retrospective exhibition of the work of Jean McAllister, one of Colonsay’s fine creative talents.

Alistair Iain Campbell and Fiona Camilla Iseabal Campbell from Arrochar married on 12th July at The Strand, and

An exhibition of works of the late Jean McAllister was held at the new Heritage Centre at the Old Baptist Church on 24th July. Described by, Julia Middletion, one of the organisers, as “a glorious event” the exhibition attracted approaching one hundred visitors, including Kate McAllister and Sheena Riley, Jean’ daughters, as well as two of Jean’s grandsons. The examples of Jean’s work included about 30 pictures from across the island, handmade cards, leather bags and woollen pieces. Perhaps the highlight was a picture of a hen made from crepe bandages used to bind her leg after a fall, which was presented to the doctor who cared for her. The exhibition was organised by Julia Middleton and Sarah Hobhouse, with assistance of Rupert and Tom Middleton, and the organisers particularly wish to thank all of those who lent their valued examples of Jean’s work to the exhibition. 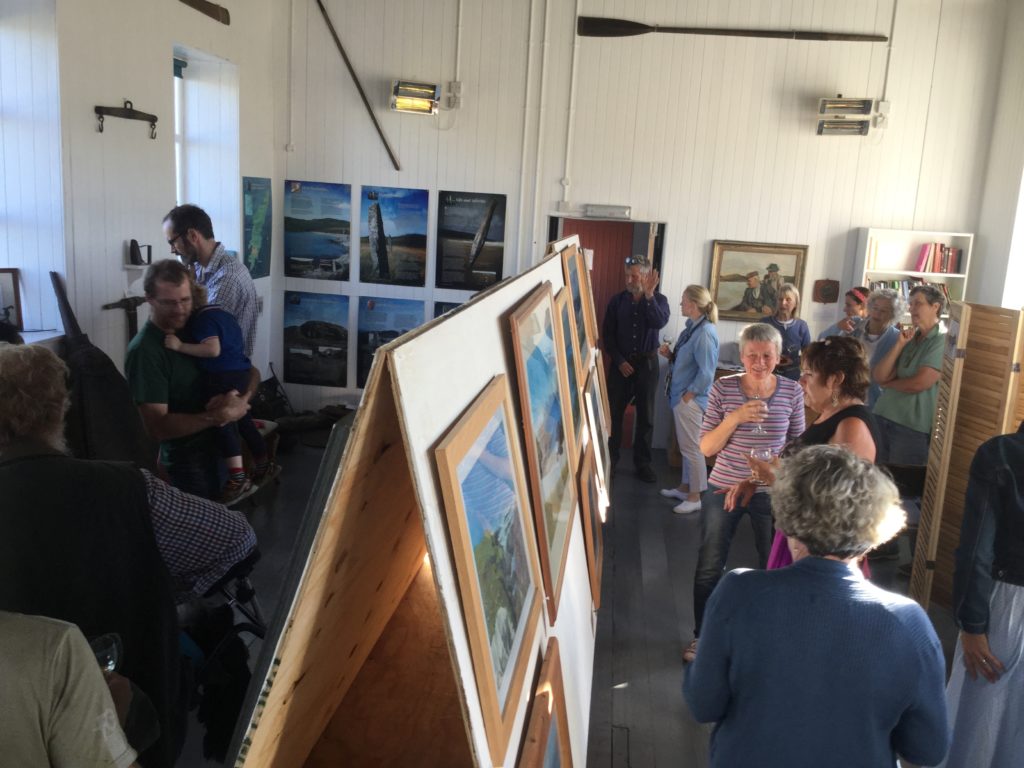 Exhibition of Jean McAllister’s work at the Heritage Centre 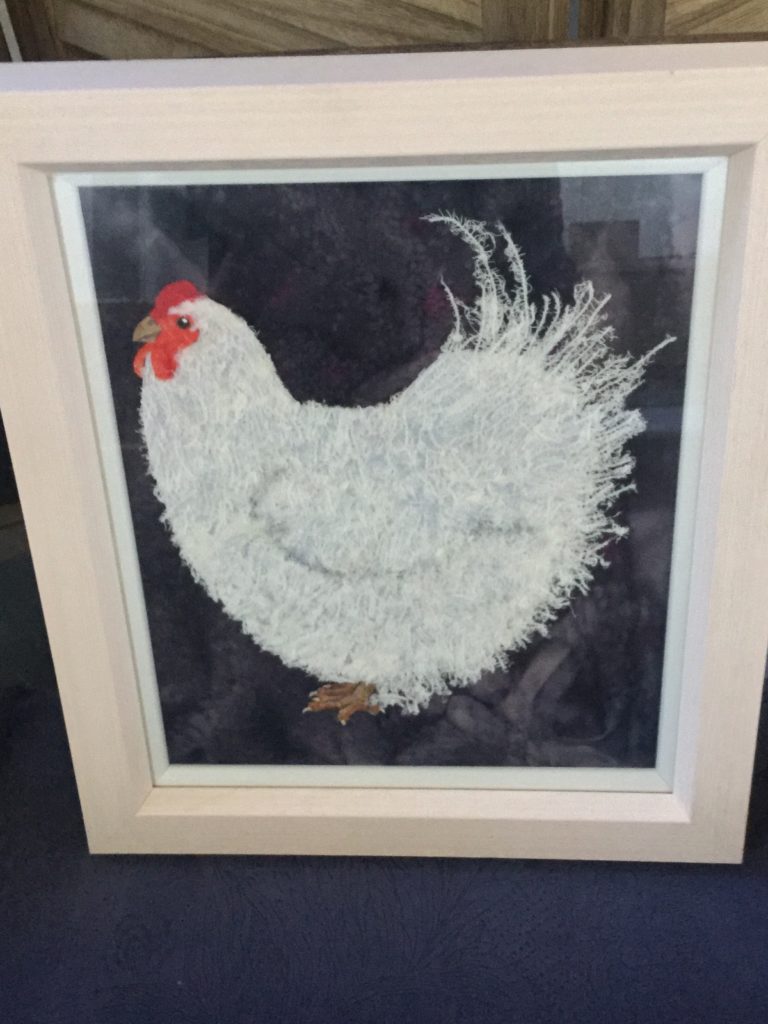 The Colonsay Rugby Festival was held on the last weekend in July, with all the activities taking place at Machrins by the end of the airfield. A temporary rugby pitch had been crafted from the machair, which was serviceable if inevitably somewhat uneven, while a large marquee was the venue for food, drink and entertainment. The player’s arrived on the Friday night to warm sunshine and a welcome party with Liam McNeill as DJ, beverages by the Brewery, and food by Gavin, who must have cooked a thousand burgers this summer.

The tournament began on the Saturday morning under rather greyer skies with the teams playing each other once, in a so called a round-robin format. Rather than the 15-a-side form of rugby, the festival has smaller teams playing shorter matches with teams of 10 for the men playing 20-minute matches, and teams of 7 for the women, playing 14-minute matches.   With 4 games each for the men and 2 for the women this amounts to a lot of rugby and plenty of entertainment for the substantial crowd that came to cheer the teams on.

Women’s 7 a side match

The men’s teams were Corrywrecken, Ochalochs, Strathendrick, Inverleith and Allan Glens, and the women’s teams were from Edinburgh, Stirling and Glasgow universities.   If some of the team names seem unfamiliar and unusual this is because the players come together specially for this event under creative team names. Sadly, the Corrywrecken team, for example, do not actually play rugby in the Corrywrecken, though it is an interesting thought to conjure with. 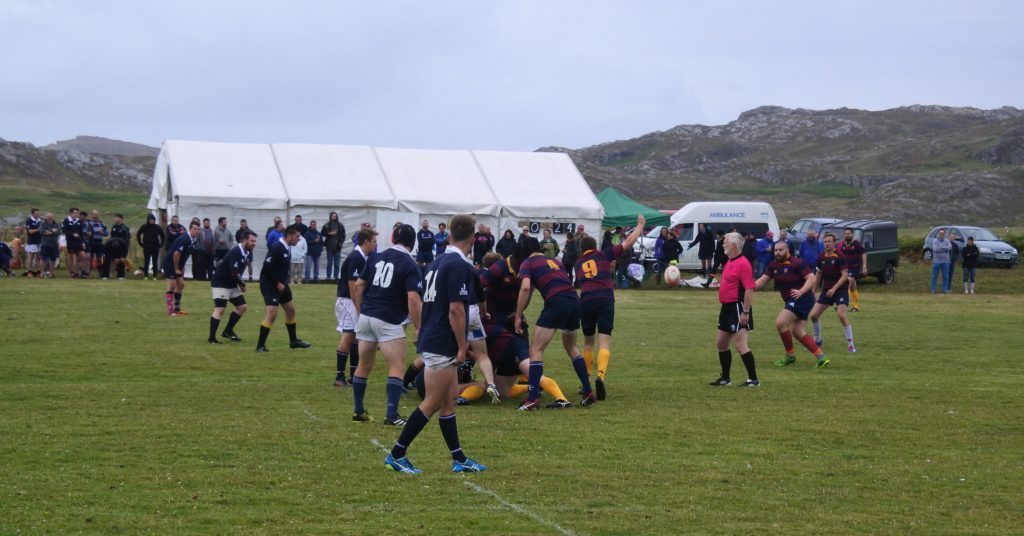 The top two teams from the round-robin matches played each other in the final, with the Ochalochs taking on Corrywrecken, last year’s champions, in the men’s final, and Edinburgh University against Stirling University in the women’s final. The finals, like all the round-robin matches, were hard fought with the Ochaloch overcoming Corrywrecken 24-14, and for the women Edinburgh University beating Stirling University by the narrow margin of 26-24. 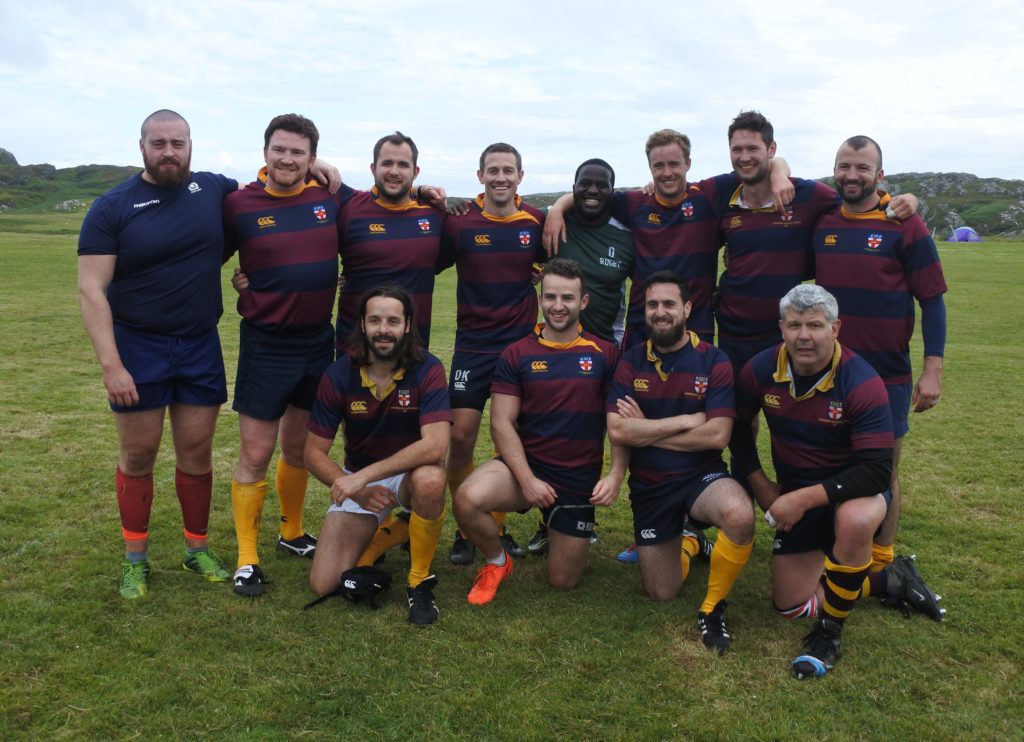 Saturday night celebrations ran well into Sunday morning with a fancy dress Ceilidh, before players, officials, and fans recovered enough to clear the site and restore to machair to its natural state.

For three weeks in July, Pedie MacNeill, Colonsay’s well known folk singer and music festival impresario, undertook a tour of the Hebrides in the company of the immensely talented Roberto Diana, and supported by Jen MacNeill and Guilia Cartasegna. The tour opened on 11th July with a gig at Colonsay’s Heritage Centre which was the first of a dozen venues up and down the west coast including Iona, Coll, and Islay, before ending on 31st July at the Creich Hall on Mull. The “Timeline” concert wove together stories and songs to tell of Pedie’s life on Colonsay with Carol, his wife, who managed the tour and kept Pedie and the band on the road. 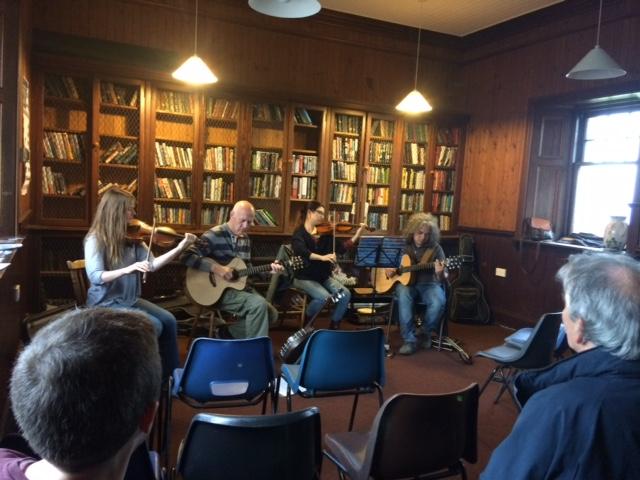 Pedie and friends playing in the library on Iona 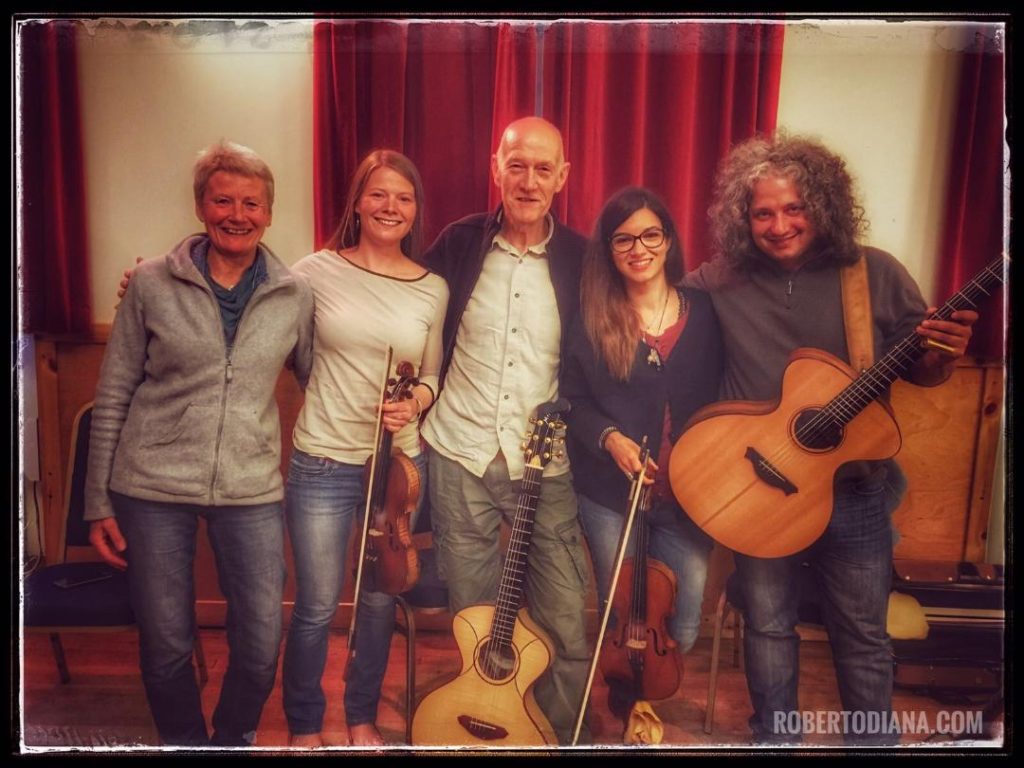 Pedie MacNeill with friends and family

The Editor would like to apologise to readers for the delay in getting this issue of the Corncrake to press. This was due to ill health in the Corncrake’s editorial team.

The full Corncrake for July will soon appear as a pdf on the website and in hard copy at the Post Office.