The island usually takes a breath in June, after the rush of Easter and the Spring Festival, which seem to recede too quickly into the memory, along this year with the sunny days of May. While southern England has basked in a heat-wave, the whole of Scotland has seen near record rainfall, and though the weather has been better, if mixed, on Colonsay, a heat-wave we have had not. Events to warm the hearts have been welcome and plentiful, with a visit from the Lochaber High School Musicians, a “Popadum Pop-up” event, and a tribute to Keith Rutherford, our now (mostly) retired postman. 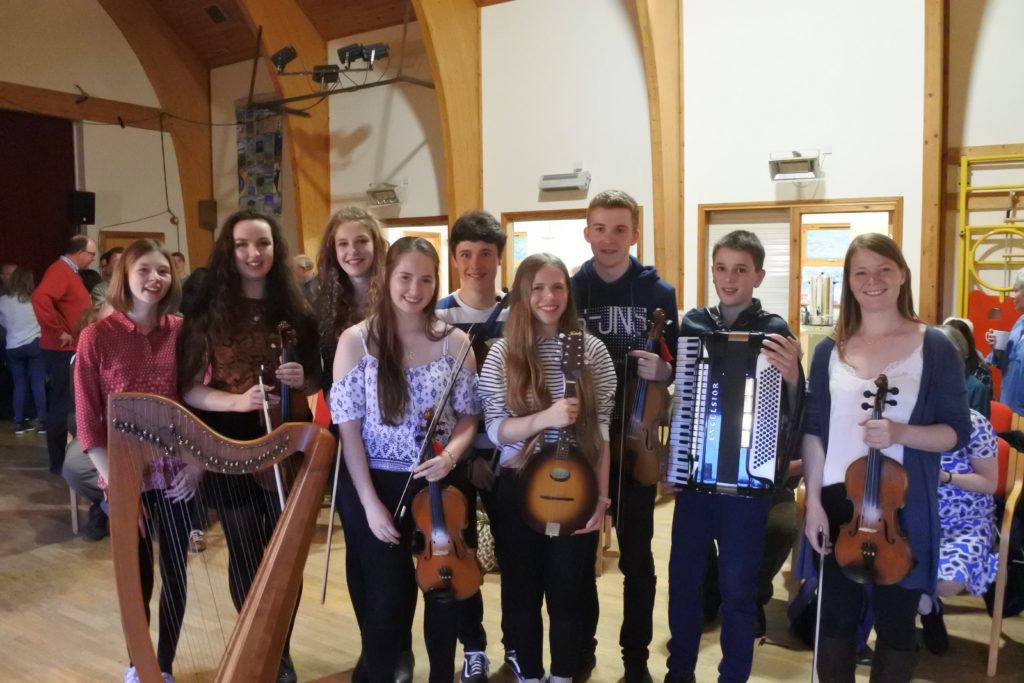 The report on the second half of the Spring Festival is here Spring Festival – the second half . The first half of the festival featured a wide variety of arts, crafts and activities, as reported earlier in the Corncrake, and the second half the festival continued with the same rich diversity. At the Old Waiting Room gallery there was a joint exhibition by Morag Tweedie, Anne Ferguson, and Carol Paterson. This was followed by an exhibition of the works of Jane Smith, who also busy doing workshops and giving a talk on her new book “Wild Island”, about her artistic experience of Oronsay. There were many other workshops and classes at the Old Baptist Church and Colonsay House, as well as an array of walks exploring Colonsay’s natural heritage. See the full article for more details.

The Corncrake reported the retirement of our Postman, Keith Rutherford, in its May issue. Unbeknownst to Keith a celebration of his contribution to the island over more than forty years had been arranged to follow the CCDC AGM. This proved to be a wonderful surprise for Keith and an opportunity for the community to say thank you for his years of dedicated services quite literally at all hours of the day and night. Keith’s contribution to Colonsay has not just been as Postman. He has been Chairman of the CCDC, a member of the Community Council, and he has also contributed in other voluntary roles. An “Early Day Motion” recognizing Keith’s contribution to Colonsay had been proposed and adopted at the House of Commons in Westminster, and Councilor Robin Currie presented a copy of this to Keith. Sheena Pelling, Irene Campbell, and Pauline Baker-Campbell then recounted stories from their time working with Keith, and the school children sang a song, which they had composed specially for the occasion. 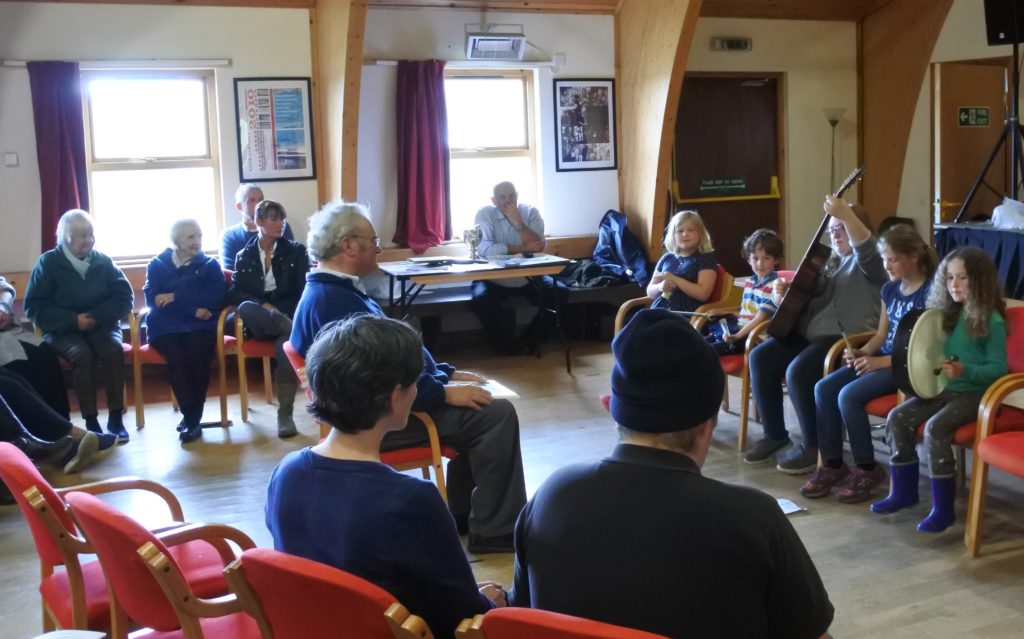 This year the number of candidates to be a Director of CCDC exceeded the number of vacant post, and so there was an election, with the following results:

Stood down but re-elected: Andrew Abrahams

The CCDC AGM also provided an opportunity for the unveiling of the first of the Colonsay mosaics. Over the winter Roz Jewell has led a dedicated group of volunteers to work on a project to create a series of mosaics celebrating the island’s natural heritage. The first of these is now finished and was unveiled by Councilor Currie and Roz in the company of the children from Kilchattan School. The Corncrake is happy to include an article by Roz describing the work in creating the mosaics.  Click here: Colonsay Mosaic Project 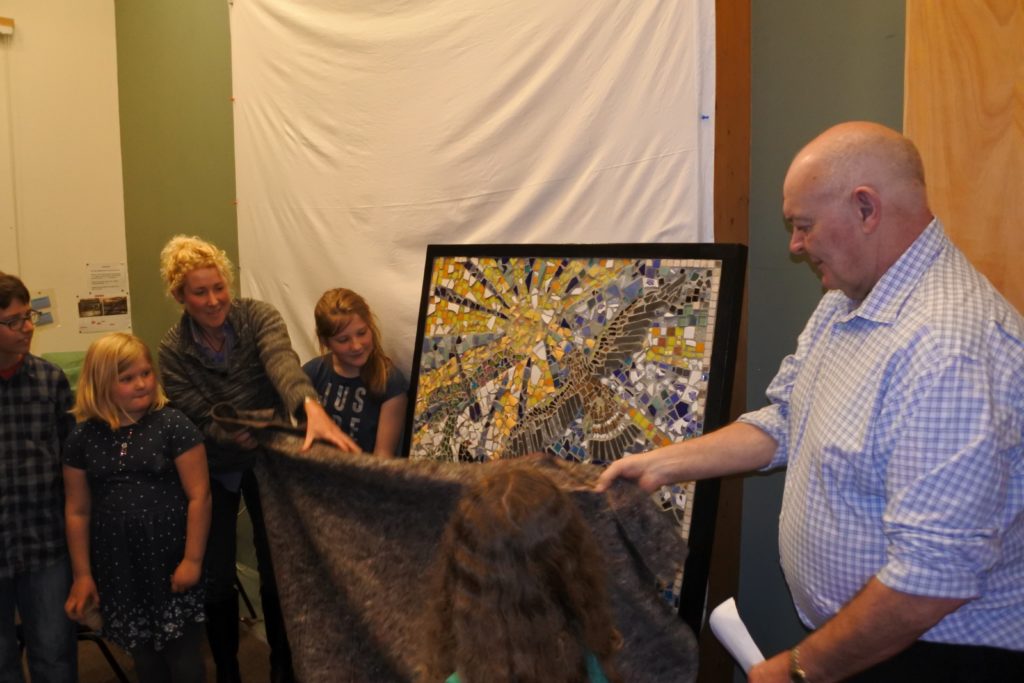 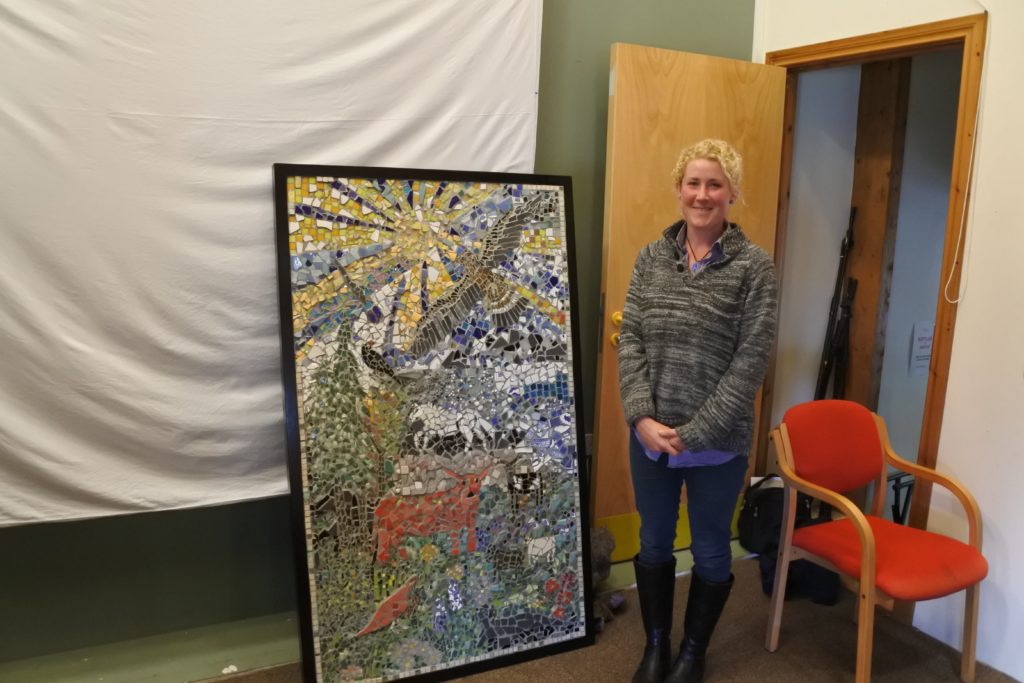 Roz Jewell with the first of the Colonsay Mosaics

At the suggestion and invitation of the CCDC, alongside the CCDC AGM other voluntary groups on Colonsay had stands and displays illustrating their significant addition to the life of the community. These included Ceol Cholasa, the Colonsay & Oronasy Heritage Trust, the Colonsay Tourism Marketing Group, the Colonsay Medical Equipment Fund, Kilchattan School Parent Council, and the Colonsay Book Festival. 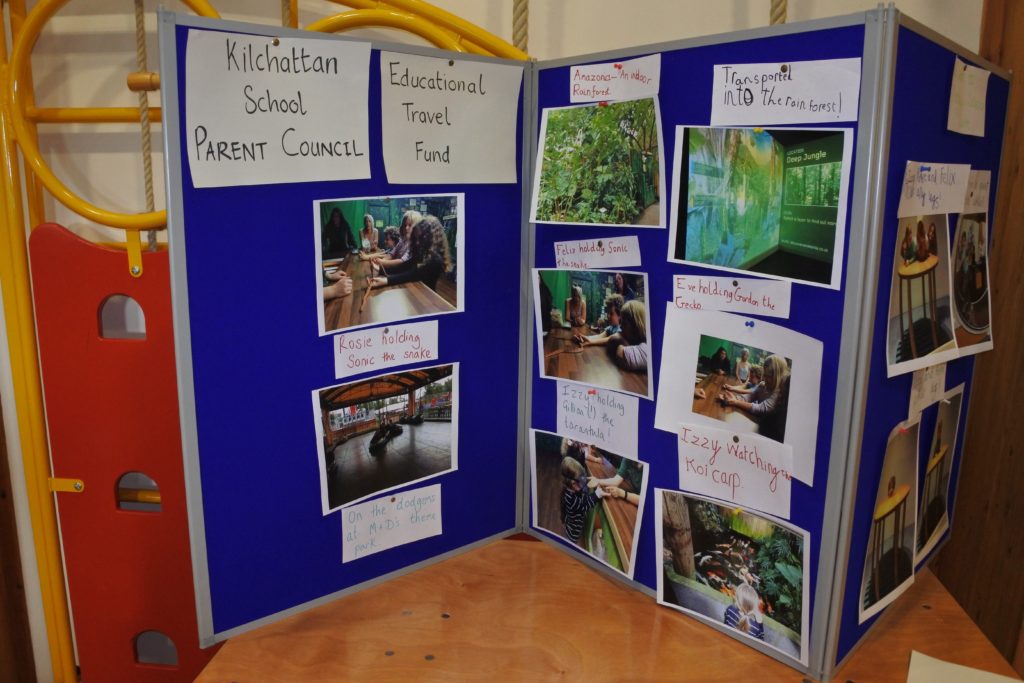 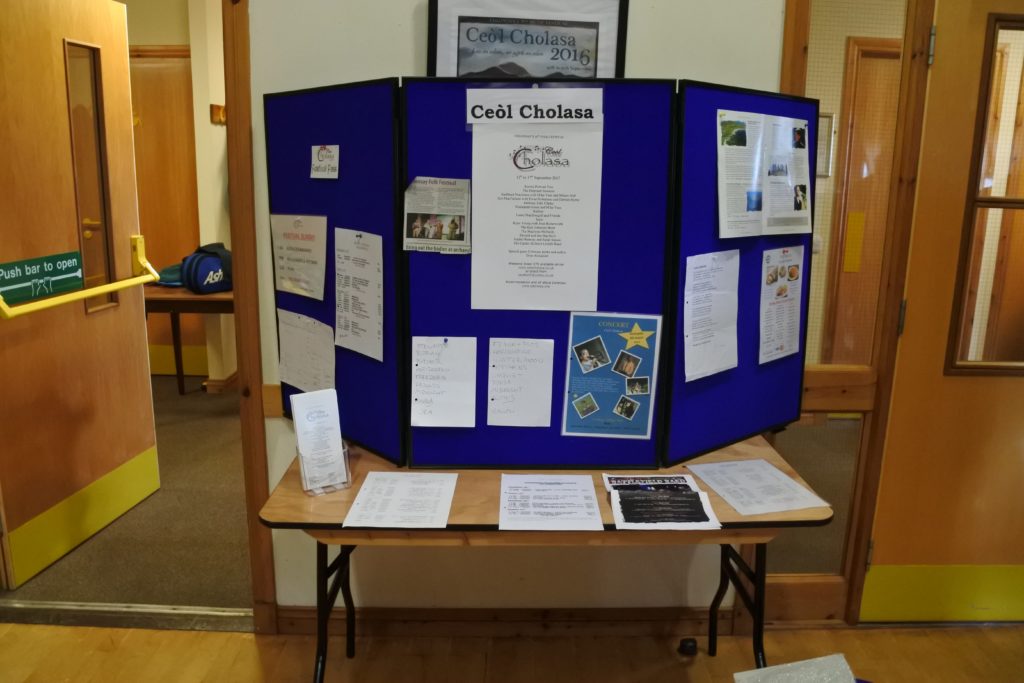 Children and teachers from Kilchattan School made two separate educational trips in June. The three eldest children went on the Stramash outwardbound course at Inchree, near Fort William, while the younger pupils went on a three day trip to Glasgow.

The three eldest pupils enjoyed some exhilarating out door activities at Stramash, including kayaking, coasteering, and gorge walking. If you, like the editor, are unfamiliar with the term, “coasteering” is

“a physical activity that encompasses movement along the intertidal zone of a rocky coastline on foot or by swimming, without the aid of boats, surf boards or other craft.”

Definitely something for young bones, but the simpler description of “jumping safely from rocks into the sea” sounds like a whole lot of fun.

The four younger children went to the Glasgow Science Centre, Amazonia ( a man-made rain forest) and M&D theme park, which all sound like a whole lot of fun too.

These trips need to be funded and the Kilchattan School Parent Council play a leading role in making these trips happen, supported by contributions from around the island. One notable one is Kevin Byrne’s annual dash up the McPhees on 1st May, which was this year supplemented by an innovate and enjoyable funding raising event conceived and delivered by Grace Johnston and Helen Mann. Grace and Helen, with help from other members of the School Parent Council put on Pop-up Papadom an evening of Indian food, bingo and entertainment. The money raised at the event was increased by a generous contribution from Irina at the hotel, who donated money from the Ceilidh she had held in May to fund her own daughter’s now postponed educational trip to Peru. As result of these efforts, over £700 was added to the school travel fund.

The school year ended for the staff and pupils at Kilchattan with the traditional Sports Day and end of term celebration. On the day a TV crew was on hand as part of the making of a BBC program about the experience of pupils transferring from an island school to a high school on the mainland. Filming will continue from time to time over the summer and autumn. The program is expected out later in the year, and the Corncrake will have the broadcast date when it is known.

The end of term prizes awarded were awarded as follows:

Dun Cholla All Round Excellence: Ella

There were also 2 new awards this year to celebrate further achievements:

Newcomer Award (for settling into a small school and making friends): Geri

On Monday 24th July at 6:30 there is an exhibition of Jean McAllister’s pictures at the Heritage Centre (Old Baptist Church).

On Saturday 29th July there is the Colonsay Rugby Festival

An in-depth Corncrake article on the Heritage Trust is scheduled for July.

The full Corncrake for June will soon appear as a pdf on the website and in hard copy at the Post Office.